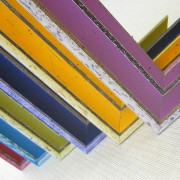 Landmarks Gallery is finally back in business. We appreciate the patience many of our loyal clients have shown during the government mandated shutdown. It’s good to be back at work and if you are tired of feeling trapped at home come on in!

Due to the global circumstances effecting everyone, we will be closed Sunday March 22 and intended on reopening as soon as possible. Please reserve any questions for email at this time and not voicemail. Thank you for your patronage.

Currently on exhibit and for sale are numerous early abstract watercolors from artist Michelle Grabner. $1,200-$1,400.

This nice beach scene of a boy and girl is from 1916. The medium is oil on board and measures at image size 7 1/2 x 9 1/2. Priced to sell at $1,200. Francesco Spicuzza beach scenes are the most sought after of his works and therefore rarely available for direct purchase.

When you have been in business for over 50 years you are bound to end up with some artwork that needs to go. We have dozens of framed and unframed, paintings, prints, posters and more that have been reduced to rock bottom prices at a fraction of their original retail value. Out with the old […]

We will be closed May 25, 26 and 27 in observance of Memorial Day. Please have an enjoyable weekend and while remembering those no longer with us, thank a veteran and/or those currently serving. Thank You!

GEORGE RAAB Born in Sheboygan, Wisconsin, George Raab (1866-1943) was the son of German immigrant parents. Raab began studies under Richard Lorenz, director of the Wisconsin School of Design. Raab also studied in Germany in the 1890s at the Weimar Art School. After returning to Wisconsin in 1899, Raab became one of the founding members […]

Even though we have many nice works of art for sale, a gift certificate in any amount large or small can be a great idea this Christmas and Holiday season for someone on your list. Gift certificates can be applied to any of our services we offer such as custom picture framing, art restoration, appraisals […]

We will be closed Saturday September 1 through Monday September 3. Our normal hours resume Tuesday September 4 at 10 am. Have a great Labor Day and safe travels.

On exhibit now and running through the end of July, are a number of original paintings for sale by Wisconsin artist Terrill Knaack. Terrill Knaack Biographical Sketch Terrill Knaack is a nationally recognized artist. His landscape and bird art have been exhibited in natural history and fine art museums across the United States, including the […]